Problem
NCSU as a customer has a need for a geodatabase to be generated from a CAD data file. The CAD dataset is not georeferenced to a coordinate system but has multiple layers of data, including some data that is not currently of interest for the geodatabase. NCSU is also providing an at scale orthoimage that will be used to georeferenced the CAD dataset. The University has indicated 6 layers that are of interest for initial geodatabase and care must be taken that each layer is accurate and complete.

Analysis procedures
Strategies: NCSU has provided an at scale orthoimage of the campus area that uses the Stateplane NAD 83, US feet coordinate system. A CAD data set has also been provided, and although it is to scale it is not georeferenced. Utilizing georeferencing tools in ArcMap, the CAD data layers will be georeferenced to the orthoimage and then data layers will be reviewed for inclusion in a new Geodatabase. NCSU has indicated that the first set of layers in the database will be streets, sidewalks, streams, lakes, buildings and athletic fields. Data must be generated and reviewed such that it is appropriate to each feature set. Finally, each data layer will be exported to the new Geodatabase.

Methods: The orthoimage SID file is imported to ArcMap and its coordinate system is set to the NCSU standard Stateplane NAD 83, US feet. The CAD dataset is likewise imported to ArcMap and overlaid on the SID file and sized manually to ready the data set for Georeferencing. Two control points were selected, as required for CAD files, in opposite regions of the extent- in this case the Northwest and Southeast areas. The control points in the orthoimage were selected so that they were close to the ground and thus a better match for a typical survey. The display was updated, and this process was repeated until good alignment across the extent was achieved. The georefencing was completed by generating a world file with the tool.

The polyline and polygon CAD data tables were inspected and table queries were done for each desired layer such that desired layers were selected and then new layers were created for each. In this way each of the six desired layers had the appropriate information required for the geodatabase. The Sidewalks, Streams, and Streets layers were all generated as selections from the polyline CAD file. The Athletic Fields and LakesAndPonds layers were generated as selections from the polygon CAD file. The Buildings layer was a special case because some polyline / line entities in the CAD data associated with particular buildings were not complete, or closed, and so the associated polygon entity was not generated. Because of this, buildings were selected as polylines to generate a new layer. This layer was then processed using the Feature to Polygon tool with a 1 meter XY tolerance to generate all of the closed polygons. 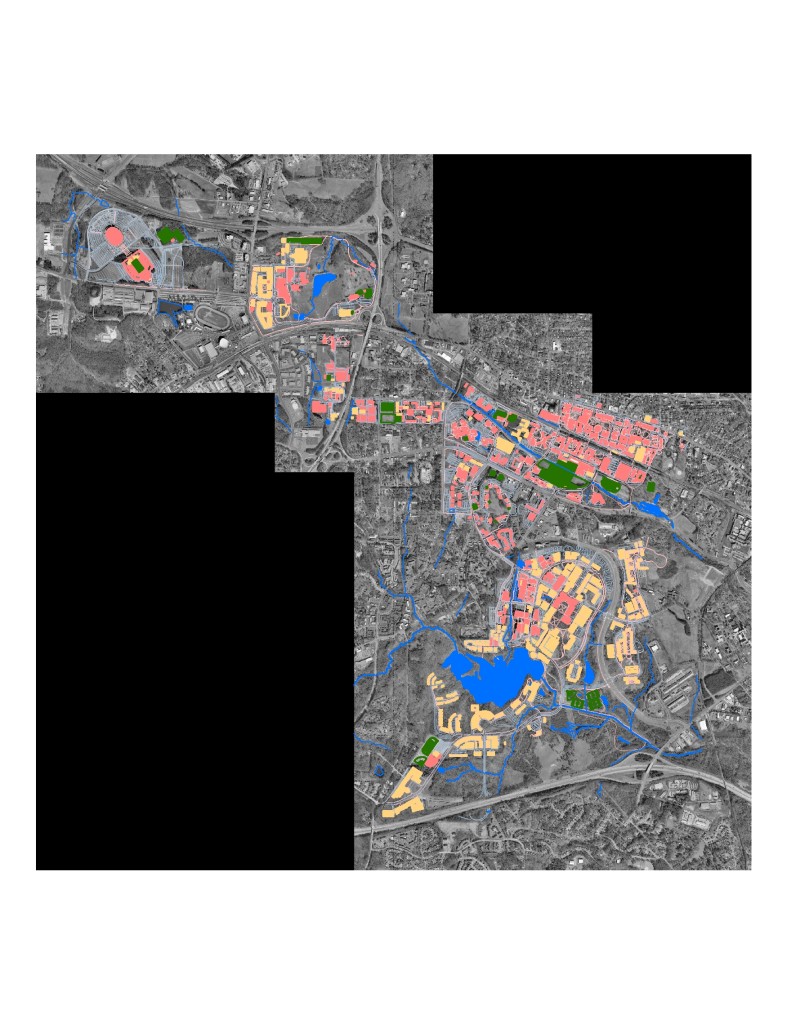 Problem Description: Generating geodatabases from CAD (or other types of data) is certainly and important aspect of workflow when different sorts of partners work together. Consider an engineering firm that requires spatial analysis as part of their design for a client, to identify anchor points for a bridge.

Data Needed: The firm has generated much CAD data and transfers this to a GIS firm.

Analysis Procedures: The GIS firm, in turn, generates a geodatabase consisting of data layers relevant to the problem, including layers that are the result of spatial analysis. The geodatabase itself is returned to the engineering firm, who work from it in a GIS to refine analysis and generate final designs.