Park biologists for the Great Smoky Mountains National Park are reviewing relocation policies for black bears that interact too frequently with visitors. For relocations to be successful, the bears must placed in areas of the park that meet certain suitability requirements related to habitat. These include being buffered from humans (removed from roads and trails), close to water and food sources (streams and certain vegetation types) and in terrain that is not too steep. This analysis will look at all of these criteria to identify so that areas can be characterized as most suitable, suitable, or not suitable. The most suitable areas would be identified as relocation areas.

Analysis procedures
Strategies: This study was completed with ArcMap tools relevant to weighted suitability analysis for site selection. This approach was taken for this study because there are multiple relevant factors and the goal was to bin areas in one of three categories: desirable, acceptable or not acceptable. The most desirable, or highly suitable, would be further considered as relocation areas. To complete the analysis then, the relevant data layers (streams, trails, roads, vegetation types and slope data layers from NCSU) will need to be converter to raster grid layers, each independently reclassified into the three categories and then overlaid (with equivalent weighting per layer) to produce a final result. The entire workflow and process was completed using the Model Builder.

Methods: Initially the environment was set up for desired results, which most importantly included setting the processing extent to the vegetation feature layer and setting the environment raster analysis default cell size to 30 meters. Each layer represented on variable of interest for the final weighted overlay and for that final step each layer needed to be a classified raster dataset using the same scale. Three layers- roads, trails and streams needed to be classified according to distance from the feature. The Euclidean distance tool converted each of these layers into the appropriate grid dataset where each cell represented distance value from the feature. The elevation layer was already a raster dataset but needed to be converted to degrees slope using the Slope tool. Finally, the vegetation type layer was directly converted to a raster dataset using the Feature to Raster tool using the GRID_CODE field, which was an integer representing one of 14 different vegetation types in the layer.

Each raster layer was then converted to the same scale, using 1-3 as the scale, so that they could all be combined in the overlay. For the trails and roads raster sets this meant assigning the lowest (least suitable) value of 1 to cells within 0.5 miles of the feature (closest to humans), a value of 2 for cells in the 0.5 to 1 mile range of the feature, and 3 for cells greater than 1 mile from the feature. These ranges were flipped for the stream data set, where close proximity to a water source (within 0.5) mile was scored 3, the highest scale value. For the vegetation type raster dataset, grape thickets (desirable for black bears) were assigned a scale of 3, cove, mixed and northern
hardwoods were all given a 2 and all other types were assigned 1. Finally, for degree slope, a low or moderate slope of less than 30 degrees was assigned a 3, 30-60 degrees were assigned 2 and greater that 60 (too steep) were assigned a 1.

Finally, all the layers were combined with the Weighted Overlay tool with equal weightings for each of the five layers. This resulted in each cell with a value in the range of 1-3, where 20% of the value was contributed from each of the five independent layers. The cells with on outcome of 3 were identified as the most suitable habitat for black bear relocation, as shown in the map below. 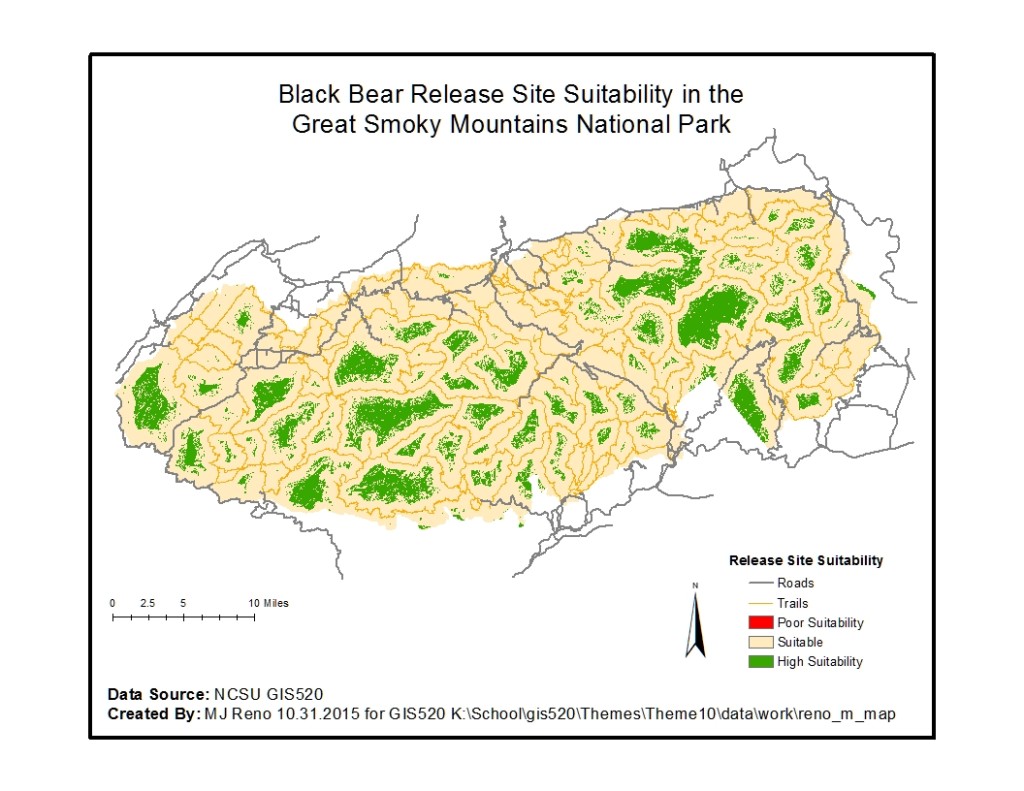 Data Needed: Optimized variables may include those such as a minimal continuous block of land that is both within a budget constraint restriction, size considerations, and also can achieve the correct development zoning. Furthermore, climate of the area, general geographic considerations of the parcel (which ties into cost related to development), proximity to population centers and access to major roadways will all be considerations.

Analysis Procedures: Independently each of these factors can be considered, data generated, and the layers scaled. The layers can then be overlaid, giving the greatest weight to the most important factors, and the best locations pushed forward for consideration.